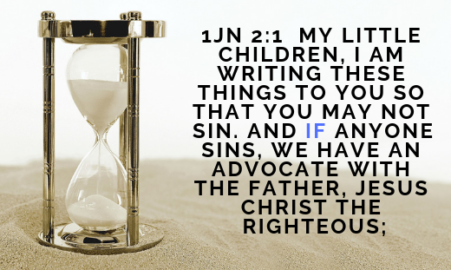 Often, those professing Christianity will go along with what leaders teach, and that, without reading the Word of God for themselves. 1John 2:1 is such a case. Many teachers use this scripture to support their doctrine of continued sin in the life of the Christian. And, instead of admonishing their listeners to repent of their sins, and warning them of their grave danger of continuing in them, they inadvertently pacify them to remain in their sinful state. But then what is in a word? Does it really matter if we say if or when I sin?

In my last post I unveiled the false doctrine of teachers who say that John proclaimed in 1John 1:8 that we all sin continually. Furthermore, they claim that he tells us in this verse that should anyone disagree with this statement they would be liars and the truth would not be in them. I refute this claim of such teachers in my previous post  A license to sin?(1John 1:8) Now these same teachers use 1John 2:1 to further this false doctrine.

Here is what they say: “When anyone sins, we have an Advocate with the Father, Jesus Christ the righteous”.

What they intend us to believe is that we all sin everyday, so it’s just a matter of time when we sin. But when we do, we have an advocate who perpetually gets our sins forgiven. This in essence is what they intend for us to believe. However, I will demonstrate the harm and the falseness of this claim through the principles of discerning truth.

Here is what John says in the first part of 1John 2:1: “My little children, I am writing these things to you so that you may not sin“.

It was John’s supreme intention in writing the letter of 1John to expose false doctrine that taught that Christians everywhere could sin without God having recourse against them. He understood very well, and taught that those who believe this false doctrine and continue in sin and, claim to be Christians, are the liars and the truth is not in them (1John 2:4)

Nevertheless, he also understood that even though walking in the Spirit of Christ removes the propensity to sin, it does not remove the possibility of sinning. For those who might slip in their walk, succumb to temptation and temporarily fall into sin, should have remorse for offending the supreme love of their lives, namely God. But, they should also not despair of not having the opportunity to be reconciled with God again.

So John continues in the same verse to say: “And IF anyone sins …” This is a far cry from what these teachers proclaim. John is saying that should anyone fall into sin they have an advocate. He definitely is not saying that we will fall into sin as a matter of course!

And Paul goes further to say that anyone who says that he promotes walking in sin will have God’s just condemnation. (Read in context Rom 3:8)

Christians do not habitually sin

As I mentioned above, we might fall into temporary sin if we let our guard down and permit temptation to take hold. Nevertheless we do not have to. If we can exercise faith in the presence of Christ and walk in His Spirit for five minutes, can we not do it for ten? How about half an hour? An hour? Five hours? A day? Forever?

For any Christian to be able to sin, he first has to cease exercising faith in the conscious presence of Christ. The very moment we halt our faith in the presence of Christ, we open ourselves up to fall. If we claim that we abide in Him we ought to walk in the light that Christ has given us through His Word. (See 1John 2:6).

John leaves no room for doubt

The letter of 1John admonishes and counsels to walk pure before God. Sin has no place in the true Christian. Those who choose to believe the false doctrine of continued sin in the believer’s life will shrink away from Christ’s appearing (1John 2:28). Their unrepentant sin will have separated them from Him (Is 59:2).

Everyone who chooses to believe in Christ for salvation and have a life in Him, purifies himself (1John 3:3). For we can’t have one without the other. No one who abides in Him sins; and adversely, no one who lives in continued sin has experienced Him let alone knows Him (1John 3:6). Christians are born of God and do not practice a life of sin (1John 3:9).

Don’t let them deceive you

The one who practices righteousness (i.e. lives a pure life in conduct, speech and thought) is righteous (1John 3: 7). Everyone who does not, is not! Do not allow yourself to be deceived by this awful doctrine of theirs . It is contrary to the essence of God, and negates the purpose of Christ.

Christians are those people only who have Christ living in them consciously. Their hearts are sanctified through faith in His living presence. Therefore, they overcome temptation and sin because the consciousness of His presence is a greater attraction than that which the world can ever offer (1John 4:4). They do not love the world of temporal sinful pleasures. They know that such love for the world only separates them from God (1John 2: 15-17).

We know that no one who is born of God sins; but He (Christ) who was born of God keeps him (the Christian), and the evil one does not touch him. (1Jn 5:18)

Let me know your thoughts on the above at hugh@removingveils.com

If you found this post helpful we would really appreciate you sharing it on your favorite Social Media. Find buttons  below

You can find out more about which cookies we are using or switch them off in settings.

This website uses cookies so that we can provide you with the best user experience possible. Cookie information is stored in your browser and performs functions such as recognising you when you return to our website and helping our team to understand which sections of the website you find most interesting and useful.

Strictly Necessary Cookie should be enabled at all times so that we can save your preferences for cookie settings.

If you disable this cookie, we will not be able to save your preferences. This means that every time you visit this website you will need to enable or disable cookies again.